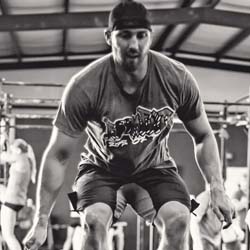 I want to make it abundantly clear who I am, what I believe and where my passions will take me.

My introduction to CrossFit was in 2005 on San Clemente Island Naval Base during SEAL training (Class 256). Unfortunately, I was injured during SEAL training. With the help of medication from the class Corpsman, and the bond of brothers literally sometimes pushing me through the soft sand, I attempted to hide my injuries for over a month. The physical stress put on my right leg from trying to stay off my left leg eventually aggravated a pre-existing growth in my right foot and the growth aggressively started growing. At one point, I could barely walk and eventually failed a timed run that forced me to see the medic. Due to the initial injury and the growth that was collateral damage, I was sent to a medical review board. I was then honorably medically discharged.

As a service disabled veteran, I began going through rehab and training to prove the Navy doctors wrong about my injury, working and training with Kory Knowles (Former SEAL, Florida SEAL mentor, former Caged CrossFit owner, Xe contractor, Co-Founder of SEAL Strong). I was looking for a way back in the military and CrossFit helped me heal and become an athlete again.

Unfortunately, the Navy disagreed, and I was denied re-entry into the Navy. I was fortunate to have friends doing private contract security work open some doors for me. Since 2008 I have worked PSD, EP, and Medic private contract security work. I have worked primarily for Drago Protective Services with the Saudi Royal Family. Other contracts include Lebanese diplomats, Former Prime Minister of Kurdistan, Iraq, assisting the Secret Service during events for two different sitting Presidents, and contracts with various TV shows for the Discovery Channel. The mental and physical lessons from the Navy and private contract are valuable tools I draw strength from when I am training and coaching at Sphinx CrossFit. I want to make it abundantly clear: I was injured during SEAL training, I am not a SEAL, although I have worked with many of them in the private sector and lost numerous brothers that I attended SEAL training with and worked with in the private sector. I only did my part both in the service and as a highly paid security contractor. There are plenty of men and women out there that deserve the title hero, I am not one of them. I honorably served my country, did what I could in the private sector to make a difference, and now do what I can to help others. In September of 2012, some of the work I did as contractor with the Saudis was featured in Gulfshore Life Magazine, to read the full article click here.

Watching my dreams die in the Navy still breaks my heart, the death of my best friend from SEAL training still hurts in the deepest parts of my soul, but what keeps me whole is not wasting that experience, I am able to be a part of the brotherhood through private contract work and use my experience to mentor and train young men towards futures in Naval Special Warfare. Since 2007, during times I was not traveling as a contractor, I have worked with my friends, the founders of SEAL Strong. SEAL Strong is a nonprofit founded and lead by former SEALs, specializing in teaching a mindset that makes a difference through mental and physical training for sports teams, schools, groups, and future Naval Special Warfare operators. Giving back to the Naval Special Warfare Community trough SEAL Strong is about giving back to a community that has given so much to me. A community of brothers that stood by me after my injury, helped me get whole again and showed me a path to success and happiness outside of the Navy. Dozens of men that I have had the honor to mentor and train since 2007 have gone on to lead successful Naval Special Warfare careers. To find out what SEAL Strong has to say about the Owner of Sphinx CrossFit click here.

At 17 years old I went from a nerdy shy kid to the start of what I am today by joining a boxing gym where the owner became a father figure to me. Sphinx CrossFit has been a dream of mine since I walked in that boxing gym. My reasoning was simple, my father and grandfather were both unhappy working desk jobs their entire lives. I saw the happiness the owner of that gym, my boxing coach had and I wanted that.

Most of my family is obese and through CrossFit and healthy eating I have been able to fight those genetics and many of the health problems that go along with that. I have lived and breathed CrossFit since I first tasted it in 2005. I have visited over 300 CrossFit affiliates in my travels. I am also a former competitive boxer and triathlete. I have used CrossFit to train for the Navy, to keep me in shape and prepare for high risk private contract security PSD / EP details, to gain 30 pounds of muscle, lose 30 pounds of muscle and compete in triathlons. The programming of the movements and workouts over time are designed and executed with a purpose and the end result is the science of fitness with proven results.

CrossFit is like a family, a brotherhood and sisterhood. To me the definition of CrossFit is community and fellowship. We push each other, critique each other, and motivate each other. CrossFit also does wonders for mental strength. It teaches you in a controlled way to push your limits and makes uncomfortable situations feel comfortable.

CrossFit makes you better. I don’t care what your goal is or what your definition of better is. As Greg Glassman says, “Write down your definition of better, seal it in an envelope, and put it away. Come back to it three months after starting CrossFit and tell me if you haven’t improved.” Again, it doesn’t matter what your goal is. Be a better Dad. Have a better triglycerides number. Whatever. Seal it in an envelope and come back and look at it three months later. Have you gotten better? I already know the answer.

Please do not hesitate to email, call or text me if you have any questions or would like to see what this community is all about! [email protected]/ 239-687-9245

“When you think of me, athletically that is, take the words ‘genetic freak, natural ability, and born athlete’ out of your vocabulary and substitute the words ‘hard working, committed, and focused.’ This removes one obstacle to doing things you never thought possible.” – “Dinosaur” (Conrad)